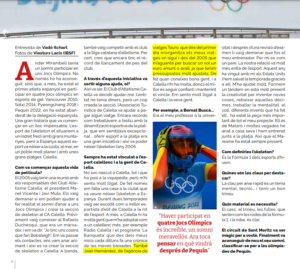 MARESME SPORTS Magazine March 2022, interview with Spanish athlete Ander Mirambell who has been competing in skeleton since 2005. He participated in the Vancouver 2010 Olympic Games, Sochi 2014, and the 2018 Pieonchang Olympic Games, thus becoming the first Spanish Olympian in this sport.
Thank you very much for your kind words.
“Also Joan Hernández, from the travel agency Tauro, who from the first day organizes my trips wherever I am and since 2005 who holds me to look for a flight one euro up or down, as we have very tight budgets “In fact, when you meet good people, there are a lot of them in Calella, because it’s best to keep trusting and maintaining the bond. I feel very attached to Calella and its people.”

This website uses cookies to improve your experience while you navigate through the website. Out of these cookies, the cookies that are categorized as necessary are stored on your browser as they are essential for the working of basic functionalities of the website. We also use third-party cookies that help us analyze and understand how you use this website. These cookies will be stored in your browser only with your consent. You also have the option to opt-out of these cookies. But opting out of some of these cookies may have an effect on your browsing experience.
Necessary Sempre abilitato
Necessary cookies are absolutely essential for the website to function properly. This category only includes cookies that ensures basic functionalities and security features of the website. These cookies do not store any personal information.
Non-necessary
Any cookies that may not be particularly necessary for the website to function and is used specifically to collect user personal data via analytics, ads, other embedded contents are termed as non-necessary cookies. It is mandatory to procure user consent prior to running these cookies on your website.
ACCETTA E SALVA